Introducing Dark Lord Obama, undetectable on VirusTotal as of July 29th, 2019. I was so emboldened that I actually went ahead and submitted the entire file knowing that upon suspicion and/or detection the news would have passed through all the antivirus vendors, including Microsoft Windows Defender. In other words, if I failed, the fires on the watchtowers would have all been lit. 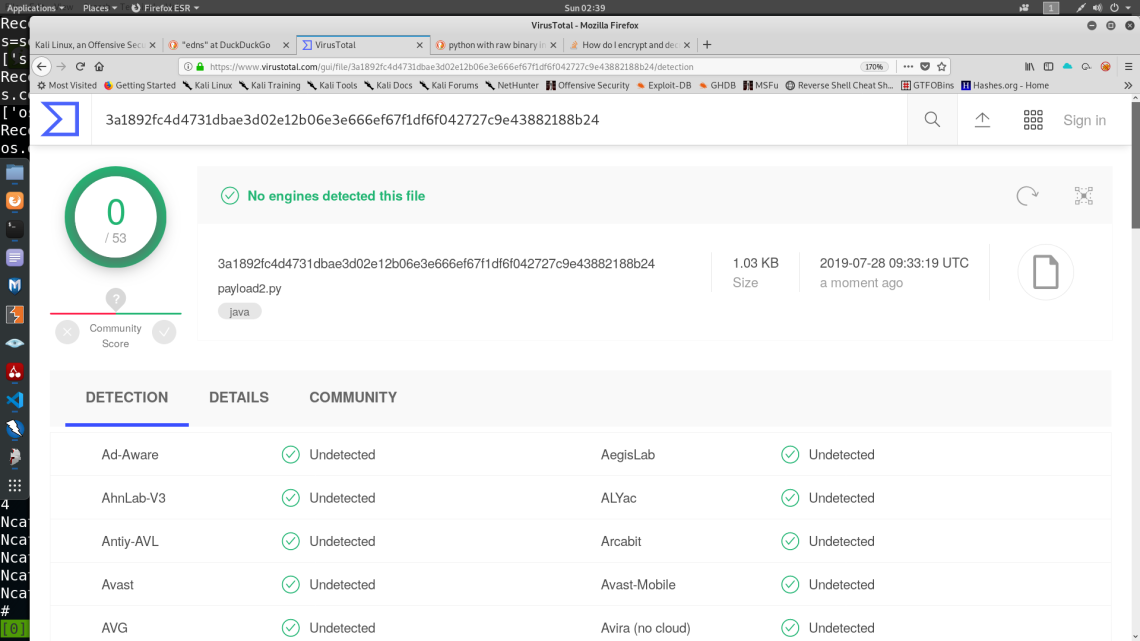 DLO generates a Pythonic reverse shell that as of July 29th, 2019, is undetectable on VirusTotal.

It combines multiple won’t-to-be-disclosed techniques (undiscloseable in detail) including but not limited to:

1. “Command Segmentation”
2. “AES Encryption” with a 32-bit key and a 16-bit initialization vector
3. Base64 Encoding – It was a necessity
4. Inline Python exec() functions, C asm() functions (will be added soon), Java/Jython, Cython, Ctypes 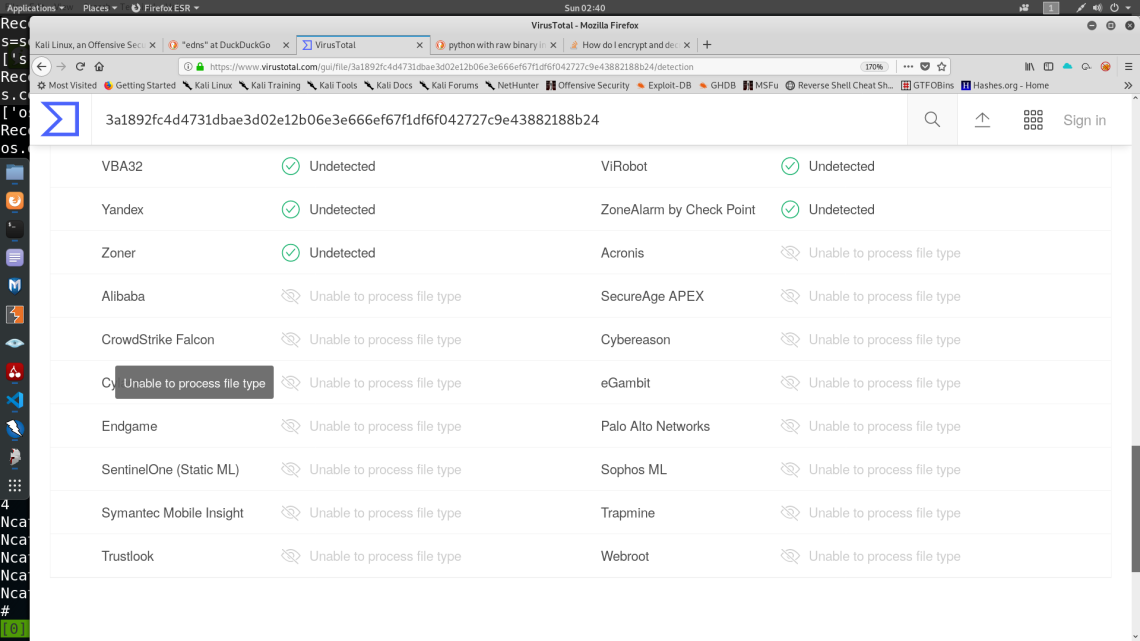 Here is proof with my SHA256Sums.

Currently it only works on targets that run Python. A cross-compilable and transpilable edition is in the works after DEFCON and after I pass the OSCP.

1. Cross-compilation – Ideal targeted platforms, Android, iOS, MacOS (already possible with py2app), Windows (requires transpiling it back to a lower level language like C, C#, Visual C++), ARM/MIPS based routers and IoT devices
2. C2 Server – Encrypts a whole TLS 1.3 certificate within the payload, and attempts to negotiate a TLS session with the Command-and-Control Server (the payload does not have the key or IV, the server sends a CHALLENGE string containing it for the payload to decrypt the TLS cert), if a IP or host fails to provide the correct TLS certificate (handshake), the C2 Server immediately issues a permaban rule on IPTables (DROP packets), designed to thwart Shodan’s malware hunter https://malware-hunter.shodan.io/
3. “Steroid Injections” – Re-writable sections of memory occupied by the payload using statically defined functions, built in reverse-SSH tunnels, and SocketServer. Instantly grant your payload new abilities without having to re-touch the disk (it modifies a function that is holding a 5,000 byte buffer of \x90 NOP instructions and then lets you CALL it). This is NOT a buffer overflow, rather, it’s pre-allocated rewritable functions that can be called after raw binary data is downloaded via the self-contained SocketServer module.
4. Dynamic DNS Support – With built-in dns resolver to ensure that you always use public DNS (1.1.1.1 or 8.8.8.8) to evade corporate DNS whitelisting
5. C2_Rotate Function – Using Ansible, Tensorflow, and Python, automate the spinning up of brand new Command-and-Control Servers, and immediately push a mass-update on all current bots to “rotate” to the new VPS. Requires Dynamic DNS subscription.
6. Built-in SSH client – Allow your payloads to create reverse SSH tunnels to tunnel out of restrictive firewalls (like a home NATed router)
7. ASM Interpreter – Run x86 Assembly Instructions or launch object .o files, and allows attackers to manually run their own shellcode they generated with msfvenom, right through the session

11. Tor/I2P Navigation – Normally reverse shells cannot navigate the .onion network if it is only configured for IPv4/IPv6 standards. A shell would land, the payload would run, but it’ll never connect back (tested on TAILS)

Currently the shell is a proof-of-concept that I successfully evaded all common static binary analysis techniques.

This module is relatively simple, it’s simple calling Python’s exec function or C’s inline assembly instructions after receiving raw platform code from the Command-and-Control Server. That SocketServer-based connection is actually a second listener port that has been opened on the victim.

Now normally, you wouldn’t be able to reach a machine with that SocketServer listening that is sitting behind a router/NAT and public IP. But if you have remote access with the reverse shell, you can simply perform a reverse SSH tunnel back to bind it locally on your C2 server with the command

This means that the victim’s SocketServer is now reachable by simply logging into your C2 and then using our future injector.py module to connect to root@localhost:9999, sending your desired instructions, let DLO ingest it and then you can call it on a interactive menu, like a function.

The design is in the drafts, but I plan to have the SocketServer and incoming TCP connections work in this format, CMD-Header (inject, delete, call) – INCOMING INSTRUCTIONS (LENGTH) – <Python, C, or ASM instructions>. My initial draft involves having overwritable buffers within callable functions that measure 5,000 bytes long, 10 of them. And that with a certain header, you can bridge multiple functions to call them together, for particularly big applications that you are trying to push into your bots.

I have yet to convert it into a full-blown Remote Access Trojan (Meterpreter, Pupy, Beacon, Empire agent etc.), however once I get the Steroid-Injector module written, you can give the shell RAT-like capabilities, since you can remotely upload Python, C, or Assembly instructions and make it do anything you want. That’s my priority update.

View all posts by ctan800